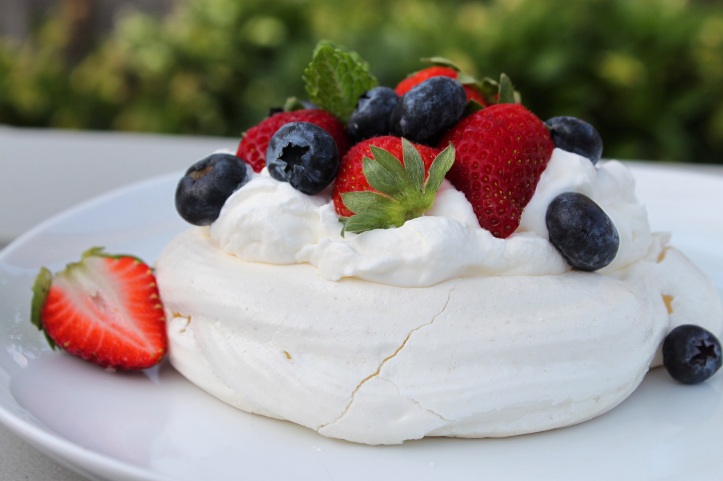 This winter I became strangely addicted to the show, the Great American Bake Off. The cast of characters including the British Mary Berry (beat that NC Commissioner of Labor) and Nina Vardalos was the start – followed by tricky baking challenges inside a giant tented kitchen within an English Garden. I loved every episode from the Battenberg Cake challenge to the Macarons!
I was particularly taken by the Mini Pavlova challenge. I’m not a great baker but I’ve made a couple delicious pavlovas in my day. Including this one that made the webpages of Bon Appetit. However, I had never made a mini version and after the show, I put it on my list of things to do in JANUARY. Okay, it’s April, I know. But it’s also berry season. Sometimes good things come to those who procrastinate? (Said no one ever.)
Mini pavlovas are even easier than large ones because they take less time to bake. And, if you mess one up, you can easily have another versus tossing the whole big guy.
Put this on your list during strawberry season. I hear there’s a bunker crop at Rudd Farm!
Mini Berry Pavlovas, insprired by The Orgasmic Chef

Whisk the sugar and cream of tartar in a small bowl. Add egg whites to bowl of a stand mixer with the balloon whisk attached and whisk at medium speed until the eggs begin to look foamy. Add the sugar mixture slowly at medium speed until all is incorporated. Increase the mixer speed to high and whisk until you can put a little bit of the mixture between your fingers and you don’t feel the sugar crystals.

Line a baking sheet with baking paper.  Place mixture in a piping bag or plastic bag with the corner cut and place the tip near the paper and squeeze until you have a small mound. This mixture will make four small mounds.

Then take a knife and flatten the top and make swirls around the sides. The swirls help to keep the meringue upright. Bake for 30 minutes and then turn the oven off until cool. I left these in the oven until serving (dont forget them if you are preheating the oven for something else!)

Remove from the paper and place on plates. Top with whipped cream, then berries.