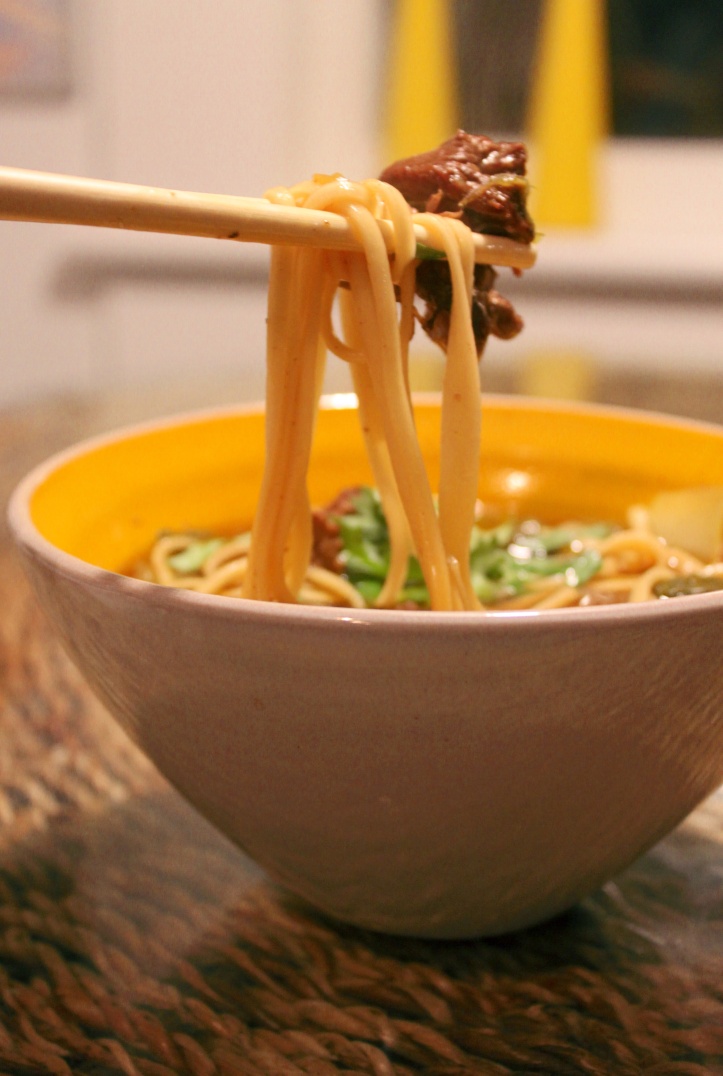 It’s starting to be soup season and I’ve been scouting for new unique recipes that can spice up the everyday. This recipe for Cinnamon Beer Noodle Soup tastes very similar to a Vietnamese Pho but has big chucks of braised tender beef chuck. I love the addition of bok choy for greens and udon noodles. Be careful with the chicken stock and soy sauce sodium levels, as the soup was pretty salty.

This is a fun weekend dish to make – as it takes some time. But it’s interesting and different enough for a dinner party.

Heat the oil in a heavy soup pot or Dutch oven over medium heat. When very hot, brown the meat on all sides. Remove the meat and set aside. Add the cinnamon, scallions, garlic, ginger, anise seeds, and chile paste; cook, stirring, for 1-min. Add the water, broth, soy sauce, and vinegar; bring to a boil over high heat. Add the meat and bring to a vigorous simmer. Lower the heat to maintain a gentle simmer and cook, partially covered, until the meat is very tender, about 1-1/2 hours, checking to be sure that the soup doesn’t boil or stop simmering.

Shortly before the soup is done, bring a large pot of water to a boil. Cook the noodles according to the package directions until just tender. Drain and rinse under cold water.

When the meat is tender, remove the cinnamon sticks. Add the bok choy to the soup and simmer until the stalks are crisp tender and the greens are very tender, 5 to 10 min. Stir in the noodles and let them warm through. Serve immediately, garnished with the cilantro leaves.