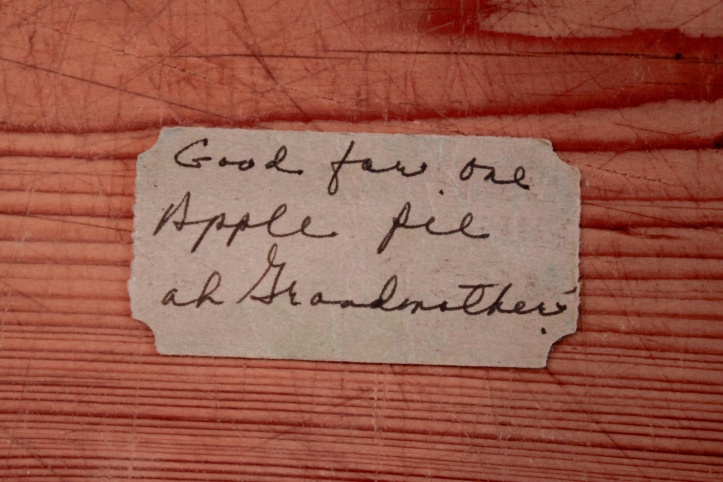 My grandmother wasn’t the finest cook in the world but she knew her way around a kitchen and believed in fresh foods before “organic” was ever trendy. She had her goto meals – a roast chicken, black eyed peas, a great skillet hamburger and a number of fresh fried fish recipes to name a few. Her standbys were a perfect mix of southern classics and old Florida recipes. Her whole roasted red fish in tomato sauce with green beans and potatoes will probably not be a recipe we attempt to bring back. But, growing up my grandmother’s apple pie was a treat to look forward to. She made the pie often and simply. Nothing was overdone or fancy, but they were homemade. Tart apples, a homemade crust and just a half cup sugar to make them just sweet enough to not need ice cream. We often made them together and the recipe was never written down.

For small celebrations or minor childhood victories, my grandmother would take little paper tickets and gift written IOUs. “An apple pie”, a “homemade quail dinner” and “hugs and kisses from grandmother and grandfather” were written in cursive and inserted into a manatee gift card. I never needed to redeem them because she would always treat us. And I’m glad I didn’t, as they are a small keep sake more valuable than most family heirlooms.

These days, I fancy her apple pie recipe up with a little lemon zest. And I cheat with store bought pie dough. It’s fairly close to the real deal and is the perfect last minute classic dessert.

My grandmother passed away in May of 2001 before the world seemed to turn over on it’s head. I often wonder what she would make of today’s politics, her grandchildren’s successes and my over complicated modern twists on recipes. However, I do think she’d be OK with my addition on lemon zest to her apple pie.

Mu, you left me much more than this recipe and I miss you so very much.

Heat oven to 375 degrees. Roll out the bottom of a remade pie crust. In a large bowl stir the apples together with sugar, lemon, flour, cinnamon and salt. Add to the pie crust. Too with second piece of dough and seal with a fork. Bake until the crust is golden brown. Your nose will be the timer.