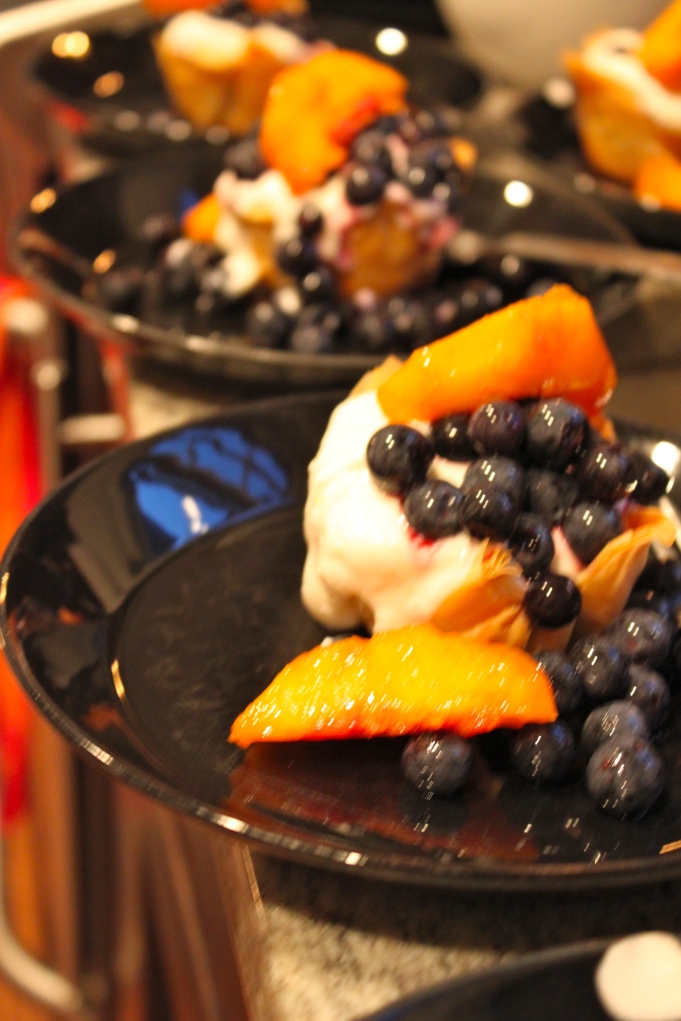 When preparing the Greek menu for our Saturday night dinner I knew we needed to use the ripe, oraganic blueberries and peaches that my Mom and Debbie brought up by way of Florida. I googled “Greek desserts blueberries,” found a couple of ideas and then started brainstorming. What was going to be a parfait of greek yogurt and blueberries turned into a play on baklava with a yogurt and fruit topping. I was inspired by a Giada de Laurentiis recipe for miniature baklava and adapted the recipe from what I had on hand. I made larger versions of the recipe using standard muffin tins and added dried figs and pecans.

This was a fun experiment with a delightful pay off. It was a nice balance between sweet and tart from the honey and Greek yogurt. We had to convince ourselves not to eat them again for breakfast the next morning! I’ll certainly make these again.

Preheat the oven to 350 degrees. Place the nuts, figs, bread crumbs, sugar, cinnamon and salt in a food processor. Pulse until finely chopped. Transfer the mixture to a bowl. Add 2 tablespoons of the melted butter and the honey and stir to combine.

Gently press each cut piece of phyllo into the muffin tin cups. Equally divid the the nut mixture into each of the phyllo cups. Bake until golden, about 20 to 25 minutes.

Meanwhile, combine zest of one lemon and honey (to taste) to the greek yogurt.