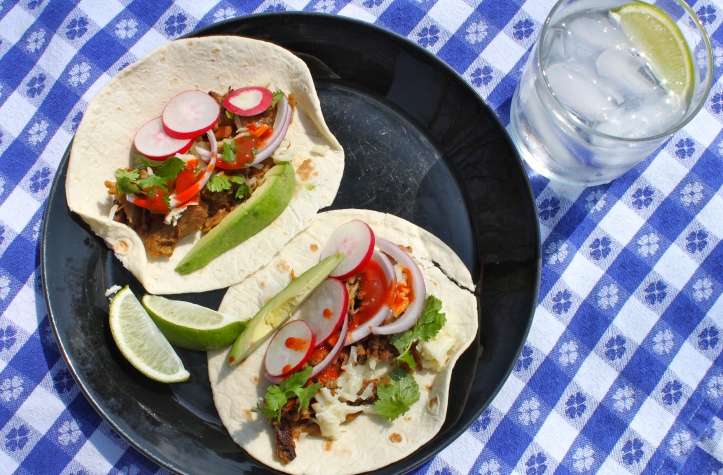 I’ve posted a variety of different pulled pork recipes – from Pulled Pork BBQ in Chilly Chicago to a very early post on pulled pork tacos. This is just another variation on an inexpensive, labor intensive and delicious cut of meat – the Boston Butt! This time around, in an effort to prove that Food Lion is cheaper than Harris Teeter (it is), I went to West Market Street Food Lion and purchased a 4 pound pork shoulder  and all the fixings for less than $30 dollars! Of course, I did have many of the seasonings at home and my friend supplied the beer to go with this wallet friendly meal. When I came home, I realized that this piece of meat was less butchered than usual. I felt like Julie Powell in Cleaving (minus the whole divorce and affair predicament) with a big knife removing thick pig skin from the meat and hacking it into cubes. I must admit, it was quite rewarding (double bonus)!

This recipe is quicker than the other pulled pork recipes that I’ve posted and simpler  – bringing out the natural flavors of the pork. I love the subtle hint that the orange leaves too. I served the pork with flour tortillas, sliced radishes, shredded monterey jack cheese, fresh cilantro, red onion, sliced avocado and fresh lime slices. The tacos were delicious with Cuban Black Beans and Rice.

Don’t wait for the next “supermoon” to make these!

Heat oven to 300 degrees.  Add all the ingredients in a Dutch oven.  On the stove top, heat the ingredients until they begin to simmer, stirring to combine the spices and meat.  Cover the pot and place it in the oven.  After the dish has been in the oven for 1 hour, stir it so as to turn the meat, and continue cooking for one hour more.  Meat should be very tender and falling apart.

Remove from oven and remove the pork from the dish, transferring it to a bowl.  Keep the liquid but discard the bay leaves, onion and orange rinds.  On the stove top, place the Dutch oven over high heat and bring to a boil.  Boil until the liquid has thickened and is reduced to approximately 1 cup.

Turn oven to broil and lower racks to near the bottom of the oven.  In the bowl, pull each piece of pork in half using two forks.  Pour in the reduced liquid and add salt and pepper to taste.  Place the pieces of pork on a wire rack on a baking sheet (we used cooling racks that we had for baking, which worked just fine).  Broil the meat for 5 to 8 minutes on each side until well browned.  Serve immediately in the tortillas of your choosing.