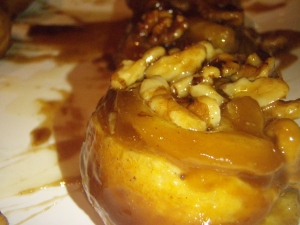 You can put these puff pastry cinnamon rolls together in a snap. I assembled them two nights before and stored them in the fridge to bake-off the morning JVS was headed off. This recipe was perfect because we both had to leave the house before 7:30 and the last things I wanted to do was 1) cook at 5am and 2) kick JVS out hungry!  I based this recipe off another Ina Garten recipe (she has gotten me hooked on how easy puff pastry is!) but I’ve made some tweaks from lessons learned.

Assembly: Using a mixer, combine half the butter and half the sugar. Evenly distribute the mixture into the bottom of 6 muffin tins. Distribute the nuts equally on top of the butter/sugar mixture. Roll out the puff pastry and spread butter onto the dough (I think you could skip this but it is up to you). Sprinkle with remaining sugar, cinnamon and raisins. Roll up horizontally and cut into 6 even pieces. Squish into the muffin tins. Refrigerate until ready to go or bake-off for about 25 mins at 350 degrees.